British born singer Jay Sean has had over a decade of success in the music industry worldwide and he’s not done just yet â€“ if anything, it’s just the start of a new lane for him. He recently announced his departure from Cash Money Records, and has released his first unsigned project since 2011, ‘The Mistress II’. Verge’s Tasha Demi sat down with Jay Sean to get his scope on how the music industry has changed since he first started and what he really thinks of fame…

Hey Jay, Letâ€™s start off by taking it back a few yearsâ€¦ You started recording over in America about 6 years ago – what is it about New York that stole your heart? And what truly British thing did you really miss?

I fell in love with the city when I started recording out there for my album â€˜My Own Wayâ€™. Going out after studio, you turn any corner and youâ€™ve got another new world of ventures and things to explore – man, I just fell in love. And what did I miss? Okay, this sounds so stupid – but they donâ€™t have Ribena over there, and that is important for me! I drink a gallon of water a day, so sometimes it gets a little boring and you just want to add a little bit of flavour to it. Iâ€™m just like, ‘What, youâ€™re America, and you have everything – but you donâ€™t have Ribena?!‘ [LAUGHS]Â

Ha, oh dear! You were signed to Cash Money, and youâ€™ve recently announced that you left the label. How did you decide that now is the right time to leave?

Iâ€™ve been trying to get out for a while now. It got to the point where there were a bunch of things not working right. My music wasnâ€™t being serviced internationally. You guys didnâ€™t get to hear any of my music or see any of my videos from the last 3 or 4 years I imagine. And then secondly, the direction of music got too Pop for me. It got to the point where I wasnâ€™t even enjoying it anymore, I was writing songs that I couldnâ€™t stomach, and I was like why am I doing this?! It sounds stupid but, I dug my own grave with them. When you have a lot of pop success – which we did, we sold 15 million copies of all my pop songs – you canâ€™t then go, ‘Um excuse me, I know weâ€™re killing it, but, can I just change it up a bit?‘ It doesnâ€™t work like that, music is a business, itâ€™s that simple. Music is meant to be joyful, itâ€™s meant to be something I love! So I knew I had to go back to doing it myself and being independent.

I can imagine that there is a huge amount of artists out there right now, in a similar situation to what you were in, where they feel the pressure to make music they donâ€™t really enjoy. As an artist who has managed to get out of that situation, what advice would you give to someone who needs to get their passion back?

Just donâ€™t do it! Donâ€™t do it if it makes you sad. Donâ€™t do it if it makes you upset. If you hate writing those songs – stop it! Because honestly, youâ€™re not gonna be happy in the end! To me, integrity means a lot, do something youâ€™re proud of.Â Thereâ€™s not enough people who are honest enough about this industry. Kids see all the fast cars and music videos and everything, and they think thatâ€™s what it is and they think itâ€™s that easy to get it. I want people to know what it really takes. Who actually prepares them for the madness theyâ€™re going to get? Who prepares them with media training and lets them know that, it could all take a turn? Nobody ever talks about that kind of stuff.

Looking at the state of the music industry right now, weâ€™re in a completely different place to previous years. Taylor Swift and Sam Smith were the only artists to go platinum last year which is insaneâ€¦

Itâ€™s disgusting, itâ€™s really bad. But listen, hereâ€™s the thingâ€¦ I used to bark on and on about fans. I used to be like, ‘Look guys, donâ€™t you understand that youâ€™re killing us if youâ€™re not buying our music?‘. But then I was like, ‘Hang on, who are we kidding?‘ These 15/16 year old kids who are listening to my music, since the moment they were born, music was free. Who am I to tell them, to go and buy something that theyâ€™ve always had for free – Iâ€™m the idiot for that! So I quickly changed my way of thinking. We are so far gone that we canâ€™t bring that back. But what I did was, I changed the way I looked at it – even if they got my music for free, they still chose to listen to me. Out of all the artists in the world, they chose to listen to me. That is support, that is a fan. So what you have to understand is, you have to find a different way to make your money, and just donâ€™t count on sales. We make our money from touring, from publishing, from endorsements – there are ways to survive and make good money from this. But it is rough, itâ€™s a rough climate.

So how do you think that the music industry has changed since your career first started?

Singers and popstars, were almost untouchable. It was almost impossible to get close to them and touch them. The only place would be at a concert or a meet and greet or something, and it was hysteria, it was crazy. Now, people can casually write you a message, and they get mad if you donâ€™t Tweet them back. Everyone is accessible now. If Michael Jackson, bless his heart, was still alive, I could write him a tweet and he might read it and he might decide to get back to me. Thatâ€™s Michael Jackson!! He was untouchable at one point! Now, itâ€™s allllll changed.

Shall I tell you what I think is a joke? Fame is a joke. Everyoneâ€™s famous. Ev-ery-one. If you have more than a thousand followers on Instagram, youâ€™re Instagram famous. Theres these girls who are just hot, thatâ€™s it, thatâ€™s all they are. Theyâ€™re not doing anything, theyâ€™re just hot and theyâ€™re sticking their arses outâ€¦ Iâ€™m sorry but this is the truth – they have more followers than some popstars and rappers. Iâ€™m not saying all girls do that, but you know what Iâ€™m talking about, and itâ€™s a problem. I think about quality, I think about dignity. I think about having a body of work that Iâ€™m proud of – thatâ€™s all that matters any more, thatâ€™s it. Just, be good at something.Â

Social media has for sure changed the industry massively! Looking back over what youâ€™ve achieved in your career, what would you describe as a turning point or the most memorable moment?

â€˜Downâ€™ was definitely the biggest turning point in my life. I will be singing that song until Iâ€™m 85 [LAUGHS]. Iâ€™m never gonna top that – how can I? It was a mega hit. It was a blessing that happened to me.

And the most memorable moment, Iâ€™d say, everything that happened around the time that â€˜Downâ€™ was number 1. The knock on effect. It was just mad. I had Justin Timberlake call me for a charity event that he was doing. It was just me, Alicia Keys, Taylor Swift, and Justin, and we all performed together in Vegas. All these mad things started happening. It was a really amazing experience.

And then onto now! You recently released a brand new mixtape, â€˜The Mistress IIâ€™. For anybody who still hasnâ€™t got their copy, tell me about itâ€¦

I was so excited about putting this out. Iâ€™m so proud of it. Itâ€™s nothing like what youâ€™re hearing on pop radio stations at the moment. Itâ€™s what I feel. Itâ€™s music that has soul and substance, which to me, is what music is meant to be. I did The Mistress I, almost out of frustration of not enjoying pop songs. I was writing all these pop songs and not getting any enjoyment out of it, meanwhile, Iâ€™ve got all these R&B melodies in my head and sick concepts, and lyrics and thoughts. As a songwriter, I was like argh I have to record it, and it all ended up having a similar theme so I put it out. I loved that process. It was therapeutic for me. I did The Mistress II simply because I loved the process the first time. There was no thought involved, no overthinking. I could do what I wanted to do. I could write what I wanted to write.

What did you find to be your favourite part of the process of making the mixtape?

The writing was one of the best things that I ever did. It was crazy because Iâ€™d go into the studio by myself, call up my engineer and that was all it was. There were no frills about any of it. I was locked away, in this little world, away from everyone, and I didnâ€™t listen to any other music while I was making it. It can affect you, it can influence you. All I was doing was listening to the music that my producer was sending to me and I just kept knocking it out. And then it was done…Â 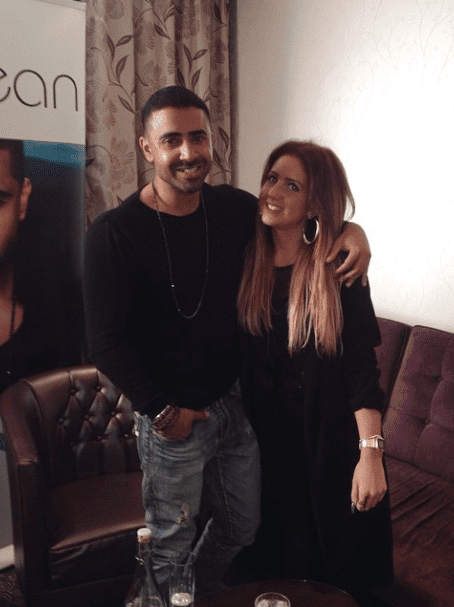 If you haven’t got your copy yet, make sure you head over to iTunes now and download Jay Sean’s ‘The Mistress II’

In this episode @matthewconnell and @dre365 catch

One for you NFL fans! New special episode of "The

Join @matthewconnell And @dre365 as they team up w


Error: API requests are being delayed for this account. New posts will not be retrieved.

Au/Ra is officially taking over our eardrums and we are not complaining. You would have heard her on multiple playlists back in 2016 with…