With the start of the new Formula 1 season ready to accelerate into full speed, we were lucky enough to be invited down to Channel 4 HQ to chat with C4 presenter Steve Jones who will be right there in the midst of all the live action.

He spoke to us about the thrills of live TV, travelling the world with the show and comparing sitting in a Formula 1 car to being buried aliveâ€¦.

You are the lead anchor for Channel 4 in their coverage of Formula 1, which is a pretty cool gig, are you a fan of Formula 1 and can you tell us how this role came about?

It came about as a total fluke, I took a call asking if I was interested in Formula 1 and of course I said yes (having no knowledge on Formula 1 and totally blagging it – you learn quickly in this industry if anyone asks if you can do anything you just nod and say yes!). I liked F1 but didnâ€™t think I would land a job presenting it.

I met up with DC (David Coulthard) and we had a brief screen test whichÂ went really well, we worked great together and they gave me a chance.Â  My knowledge was very limitedÂ in the beginning, so I had a big crash course and crammed crammed in everything I could from the previous season and essentially spent the months in the lead up to the first race being terrified and wondering what I had got myself into.

The Formula 1 season is about to kick off, what are you most looking forward to?

I adore the racing, seeing the cars move at that speed, the excitement and the adrenaline. There is so much going on all the time as the show is live and anything can happen, thatâ€™s what makes it exciting and a dream for any presenter. With F1 literally anything can happen! Â I am also looking forward to working with my team again and spending time with them, weâ€™ve really become a family.

Have you been lucky enough to take a car out for a test drive?

I sat in a two-seater car in Melbourne last year, and it was a hilarious experience, as I couldnâ€™t fit in it. Usually the drivers are pretty little guys so I felt like I was being buried alive, so unfortunately I donâ€™t think I will able to drive a Formula 1 car anytime soon.

I also had the chance of trying out the F1 simulator at Red Bull, which was exhilarating.

What has been the most challenging part of your job?Â

Formula 1 without a doubt, as I said when I was offered the gig I said yes immediately because as a presenter after 14 years I was lucky enough to be offered something totally different to what I knew, Iâ€™ve loved the work I have done including entertainment, music, dating shows etc., but this was totally different and I really had to learn a lot. The live shows to begin with were completely alien to me as I didnâ€™t know all the right terminology and I had to learn to shake it off, you’re bound to make mistakes but move on.Â 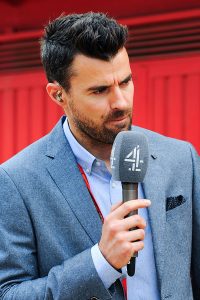 Your career to date has been quite varied, you started as a model, and youâ€™ve done radio, TV and even dabbled at some acting with smaller roles in some films like â€œAngus, Thongs and Perfect Snogging”. Is there anything left to do? And what would be an ambition yet to conquer?

I consider myself to be a very unsuccessful model (we at Verge totally disagree with Steve having modelled for Armani at the Royal Albert Hall). I have met Giorgio Armani who was such a nice bloke.Â Regarding what I want to do, I honestly donâ€™t know, I donâ€™t make plans. Iâ€™m very Buddhist in that sense no past no future just the present – and I havenâ€™t done too badly so far.

If you could work with one person past or present who would it be and why?Â

Miquita Oliver. She is such a talent and is the funniest woman I have ever met! I would love to do something else with her in the future as she is the best presenter I have ever worked with.Â

Who has been your favourite interview?Â

Will Smith most definitely, he was so humble and enthusiastic but I was totally in shock. He for me is a superstar, and is just the most fantastic guy every time I interview him. His advice to me once was about avoiding jet lag; he told me to over eat and to this day I have listened to that rule, although I over eat as a habit so itâ€™s not much effort required!

Over the last few years you’ve worked quite a bit State side, with American X Factor so will the UK be losing you to work more over there?Â

No, I am very happy here, my wife is happy here. I enjoyed my time in America and it was a great experience living in Hollywood for a few years and I loved it. I met my wife over there, sheâ€™s from Las Vegas and sheâ€™s amazing.

I lived over there when it was Obama’s America and I am not too sure what Trump’s America would be like to live in, everything seems to have a bit of bitter taste now. So no, here is where I want to be, it’s closer to my family and I have no intention of going to live there.

What advice would you give our readers who want to better their chances at becoming a presenter?

I feel a bit of a fraud in the sense that I have been very lucky and my first presenting job â€œpop factoryâ€ was really a fluke, and a friend told me about it as it was in the local paper. I auditioned for the show and was given the job presenting two weeks later! But what I have learnt is if you want to continuously work you have to apply yourself and always be nice. Â Also if you want to present make sure you have a thick skin and be comfortable being you.Â  As a presenter youâ€™re not acting you are being yourself and what Iâ€™ve learnt over the years, particularly with social media being so prevalent is that everyone has an opinion and can critique you all the time, you just have to do what you do best. Nowadays there is instant feedback on all work you do and you canâ€™t let that affect you.

Channel 4 is the home of free-to-air Formula 1 in the UK with live coverage of 10 Grand Prix this season and comprehensive highlights of every race weekend. You can watch the Highlights of the Australian Grand Prix on Channel 4 from 2pm on 26th March. For more information, visit channel4.com/f1

Sian is excited to take on the role as the new Verge Music and Entertainment Editor. Having trained at The infamous Brit School, Sian entered the industry at a young age and never looked back. After gaining a BA Hons in Theatre dance and working for over 15 years as a professional dancer, Sian has two stepped her way across the globe behind some of the biggest music industry stars! After hanging up her dancing boots she's worked continuously within the industry on set and behind the scenes, with stints at SONY BMG and ITV. Never being a salad eating kinda girl Sian is a lover of all good food, good music and usually has her nose in a good book! Failing that she's online shopping. Lover of the sun and all things positive!

As Festival No.6 gets ready to celebrate its fifth year in its beautiful home of Portmeirion, weâ€™ve picked out ten cultural delights taking place…