Understanding how student loans work is a challengeâ€¦ 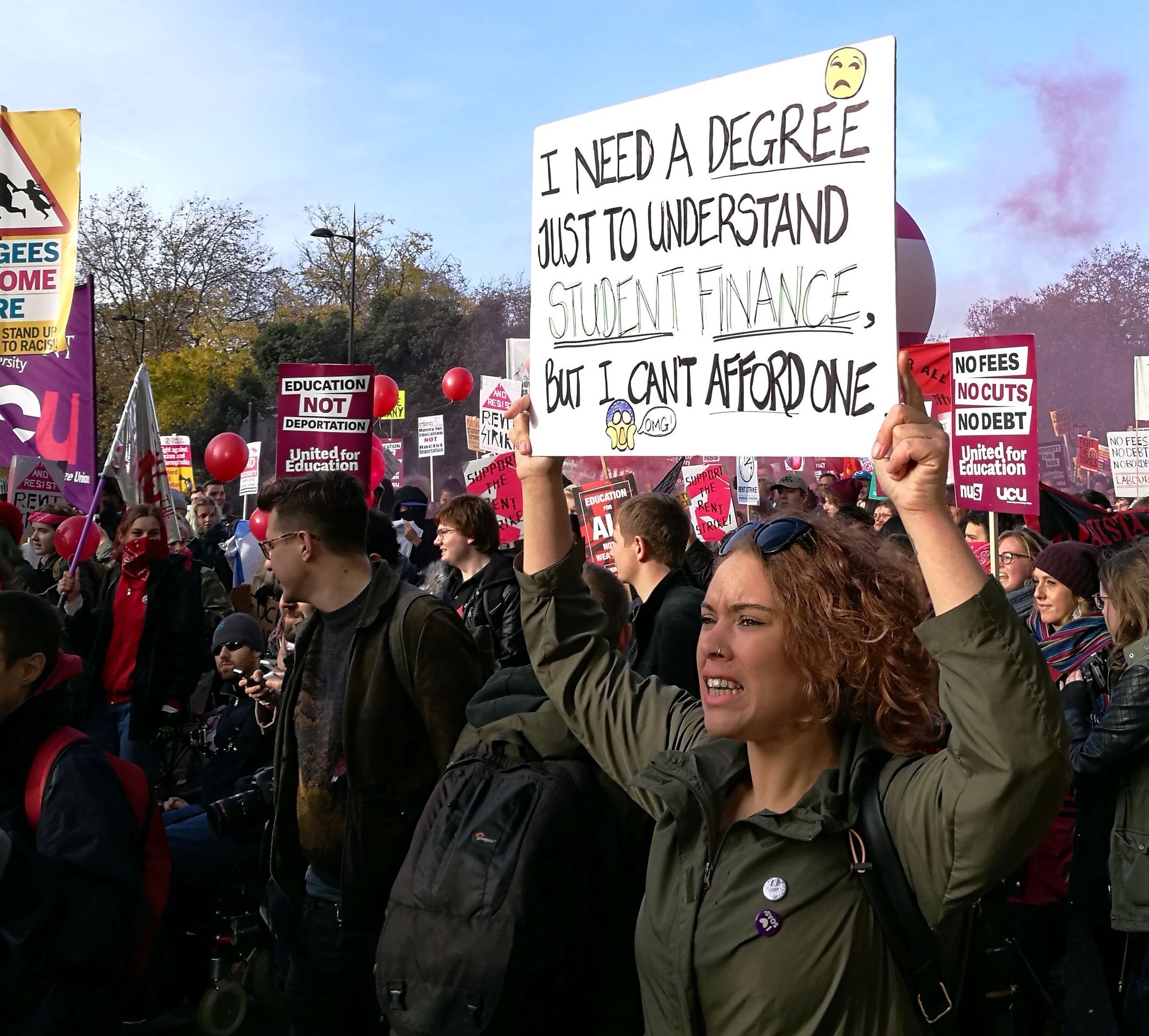 …so is coming to terms with their size, as students from the #Nov19 protest march in London demonstrate. Fifteen thousand students passed through the Capital in a magnificent display of unity, voicing a clear message about student debt: it is unfair and huge. The public procession asked politicians to look beyond the placards and see the private misery of student loans. A Â£42,000 debt is not unusual. Why are student loans this large?

In addition to covering tuition fees of Â£9,000, which may rise, student loans are increased by the profits students pay to third parties. These are people and institutions making money from students, such as investors in halls of residence. Their profits are conservatively estimated to use 10% of studentsâ€™ loans.

Without such profit element, student loans would be less. In this example, the Â£42,000 would be Â£37,800 instead. The lower the loan, the less interest, and costs paid on it.

How do loans work?

When you borrow money, you pay the lender for using its money, until all the money is repaid. That is fair enough â€“ the money belongs to the lender after all.

How much you pay for borrowing the lenderâ€™s money is normally calculated as an interest rate on what you borrow:

How do student loans work?

RPI is the retail price index, which is included in student loansâ€™ total â€˜interestâ€™ rate, even though it is an index, not interest.

This is because compounding is a completely different beast to normal interest: when interest is compounded, it is added to the loan making it bigger and bigger. Interest is charged on that bigger and bigger loan instead of the actual loan. This happens every month with student loans, for up to 30 years.

In this example, monthly compounding â€˜interestâ€™ adds Â£59,073 to the cost of normal 4.6% interest – without repaying the loan itself. This would be less if some loan had been paid off.

Graduates like Alexandra can barely afford the â€˜interest,’ let alone repaying the loan itself.

These rates are a long way from the 4.6% charged and even further from a more reasonable 1% normal interest.

Compounding is a growing pain.

Because compounding gets worse as the loan gets older, the most pain in compounding is felt after the first ten years. Graduates could easily be paying several hundreds of pounds a month on â€˜interestâ€™ alone, without shrinking their loans.

Instead, the loan grows as graduates start their own families. Because the loans last for thirty years, graduates could be paying for them throughout their childrenâ€™sâ€™ lives, and while their own children are at university, too.

The more of the loan that is paid off, the less it will cost, but with the loan growing fast each month, this is difficult to do.

There is no respite from this â€˜interestâ€™ rate.

The 4.6% monthly compounding â€˜interestâ€™ is paid on loans from the moment it lands in studentsâ€™ bank accounts until the loans are completely paid off, or written off, after 30 years.

Once graduates earn over Â£21,000, 9% of earnings over Â£21,000 are taken for loan costs. If you earn Â£22,000, you pay Â£7 per month. This will barely make any difference to the compounding interest, which increases the loan and ensures it stays in your life for many years, taking an ever-larger slice of your rising earnings.

Graduates like Alexandra pay money away without making a dent in their actual loan.

Forecast increases in the RPI and UK base rates will increase the cost of student loans even more, as will any further hikes in fees.

This cost bites with sharp teeth: student debts are now considered by mortgage lenders, restricting graduatesâ€™ ability to own a home.

What can you do?

Ask your MP and the NUS to tackle high loan costs and third party profit. Write to your MP here.

Estelle Clarke is part of theÂ Advisory Board of The Intergenerational Foundation.

0 replies on “How Student Loans Work”