Verge Magazine have partnered up with 20thÂ Century Fox UKÂ Â for the new film Alien: Covenant and have a pretty neat giveaway!!

The winner will get their hands on some serious goodies in this exclusive Alien:Covenant pack which includes: 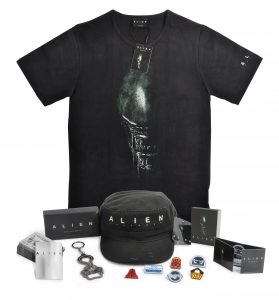 It could not be easier, Â you simply answer one question….

And that question is.. (Drum roll please) :

Which star of This Is The End will play Tennessee in Alien: Covenant?

All you need to do to win is get in touch with the right answer to info@vergemagazine.co.uk or tweet @vergemagonline

Ridley Scott returns to the universe he created, with ALIEN: COVENANT, a new chapter in his ground breaking ALIEN franchise. The crew of the colony ship Covenant, bound for a remote planet on the far side of the galaxy, discovers what they think is an uncharted paradise, but is actually a dark, dangerous world. When they uncover a threat beyond their imagination, they must attempt a harrowing escape.

Sian is excited to take on the role as the new Verge Music and Entertainment Editor. Having trained at The infamous Brit School, Sian entered the industry at a young age and never looked back. After gaining a BA Hons in Theatre dance and working for over 15 years as a professional dancer, Sian has two stepped her way across the globe behind some of the biggest music industry stars! After hanging up her dancing boots she's worked continuously within the industry on set and behind the scenes, with stints at SONY BMG and ITV. Never being a salad eating kinda girl Sian is a lover of all good food, good music and usually has her nose in a good book! Failing that she's online shopping. Lover of the sun and all things positive!

Unsure of what you want to do when you leave uni? Relax, you’re not alone. We’ve all had sleepless nights worrying about what career…