2015 has already kicked off as a super exciting year for Musicalize. We announced just last week that Omarion is set to headline their first show of 2015 in March, and they’ve already announced the stellar headliner for their show in April- NELLY!

A savvy rapper with crossover appeal, Nelly first debuted in 2000 with “Country Grammar”, consistently returning to the charts with smash hits like “Hot in Herre,” “Grillz,” and “Dilemma.” His universality was partly rooted in his hometown, St. Louis, MO, which set him apart from all of the prevailing rap styles of his time. Nelly never shied away from a pop-rap approach, embracing a singalong vocal style that made his hooks catchier than most. As a result, Nelly became a rapper capable of crossing practically all boundaries, from the Dirty South to MTV’s Total Request Live and everything in between. The highly anticipated show from will see the rapper perform his well-known classics as well as material from his last album M.O.

Tickets are available from Â£20 so make sure you grab yours from Ticketmaster, The Ticket Sellers or AXS so you can catch Nelly live at the Indigo2 on Saturday 4th April! It’s the first bank holiday weekend of 2015, so you have no excuse!

Support acts will be announced in the coming weeks, but in the mean time, for all things Musicalize, give them a follow on Twitter @Musicalize! 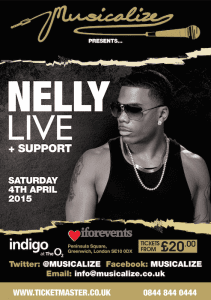 New @googlepixel 5 has arrived! Check it out in "T

Look out for an all NEW episode of the "Alternativ

Keep a look out for @laliga content on Verge and @